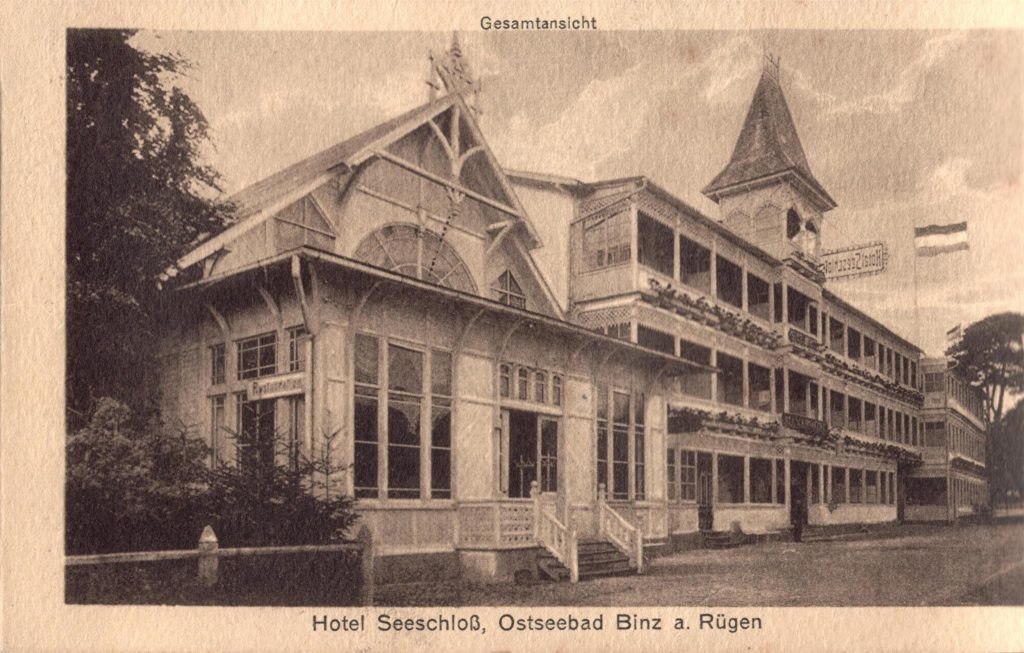 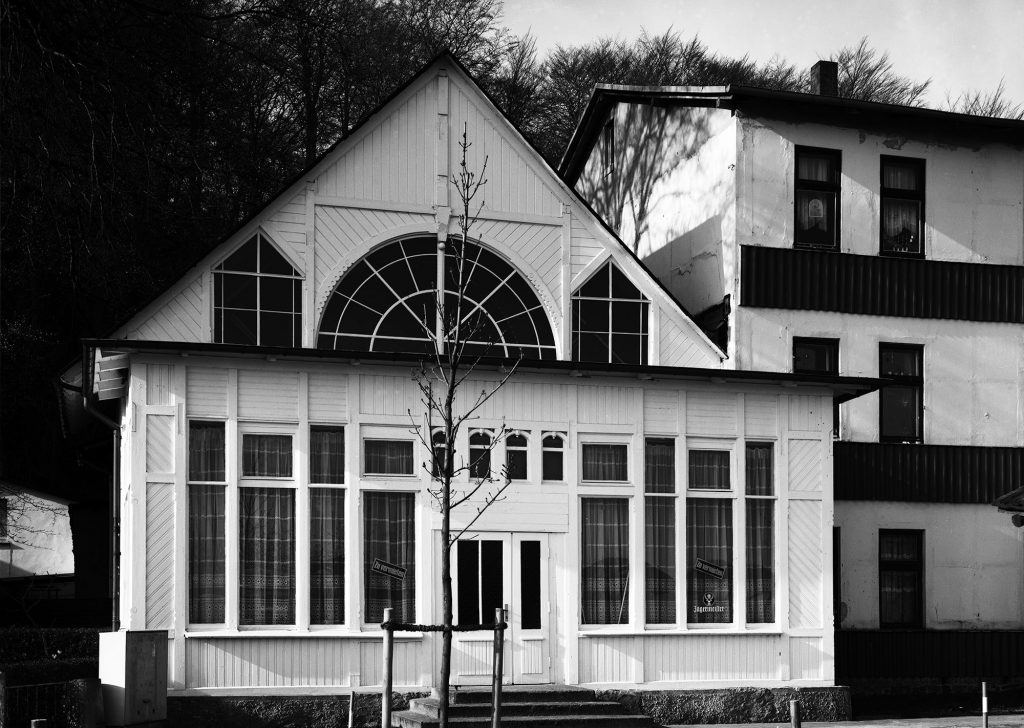 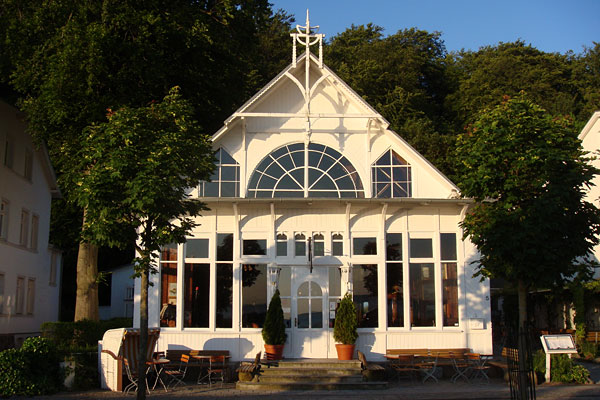 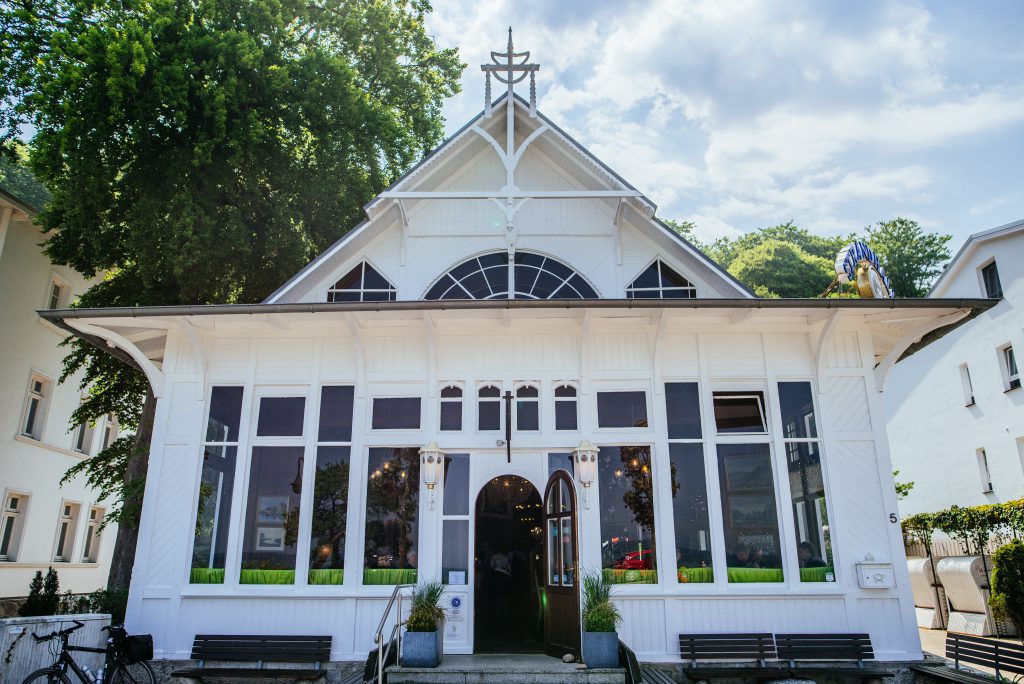 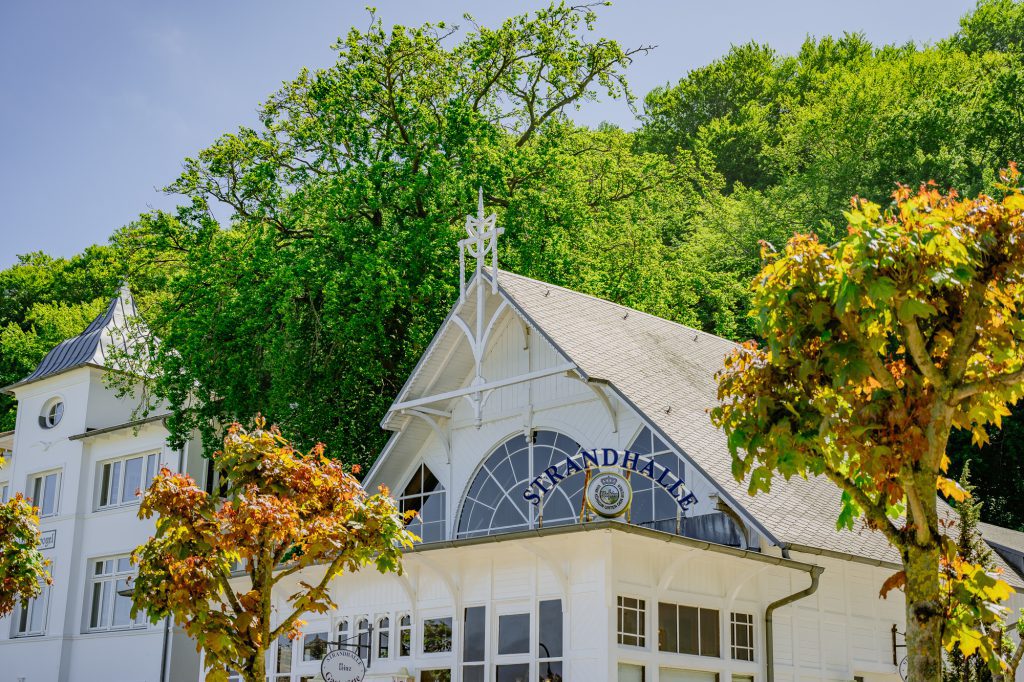 Formerly known as: no previous names Architecture: The Strandhalle was a wooden annex to the Hotel Seeschloss, built in the style of a Scandinavian hall. Barbara Finke, in her book Country Houses and Seaside Villas, describes the Strandhalle as follows: ‘The building follows in the tradition of the wooden halls that were frequently used as dining or dance halls. The structure, with its windows reaching up into the gable and wooden decorative features on the roof ridge, gives the impression of a small chapel, especially when viewed from some distance. Inside, the hall is of a beautiful, exposed wooden construction with patterned struts.’ Opened: circa 1893 History/proprietors pre-1945: Wilhelm Klünder opened his Seeschloss hotel in 1893. It had an annex that was used as a dining hall and is now known as the Strandhalle (‘Beach Hall’). Alongside its use for dining during the season, the annex served as storage for the Strandkörbe (traditional hooded wicker beach chairs) in the wintertime. In 1942, the Seeschloss hotel together with the Strandhalle passed into the possession of Albert Härtelt.  GDR period: In 1950, the Seeschloss next door to the Strandhalle was used as the FDGB’s (‘Free Federation of German Trade Unions’) first holiday home. In 1953, Albert Härtelt and his family suffered the same fate as many others. They were exiled as part of Project Rose. During the GDR period, the Strandhalle was principally used as a catering venue for the surrounding FDGB holiday homes. Post 1990: After 1990, the property was returned to Albert Härtelt. He in turn passed it on to his daughter Doris Kaiser-Härtelt, who renovated the Strandhalle. Following a comprehensive and careful refurbishment conducted with great attention to detail, Toni Münsterteicher began running the Strandhalle as a restaurant. A visit to the Strandhalle is like a journey back in time. The venue’s motto is:  ‘bourgeois cuisine, king-sized portions and pauper prices.’ Current use: Restaurant serving quality home cooking.