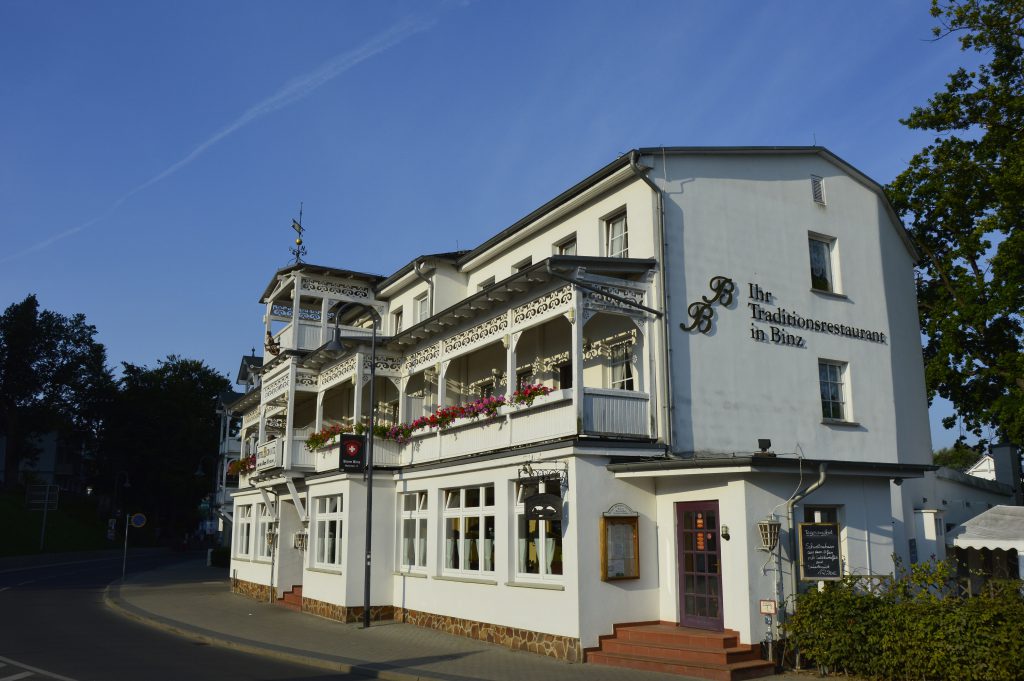 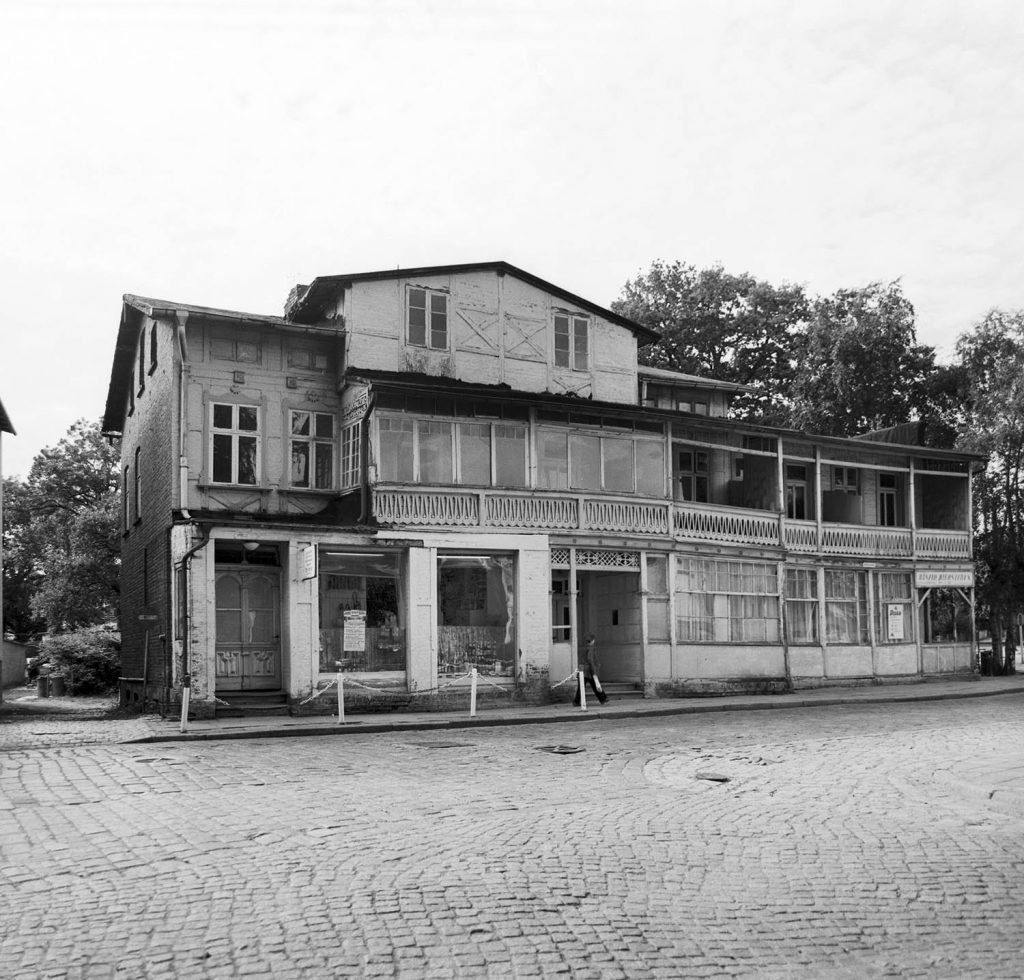 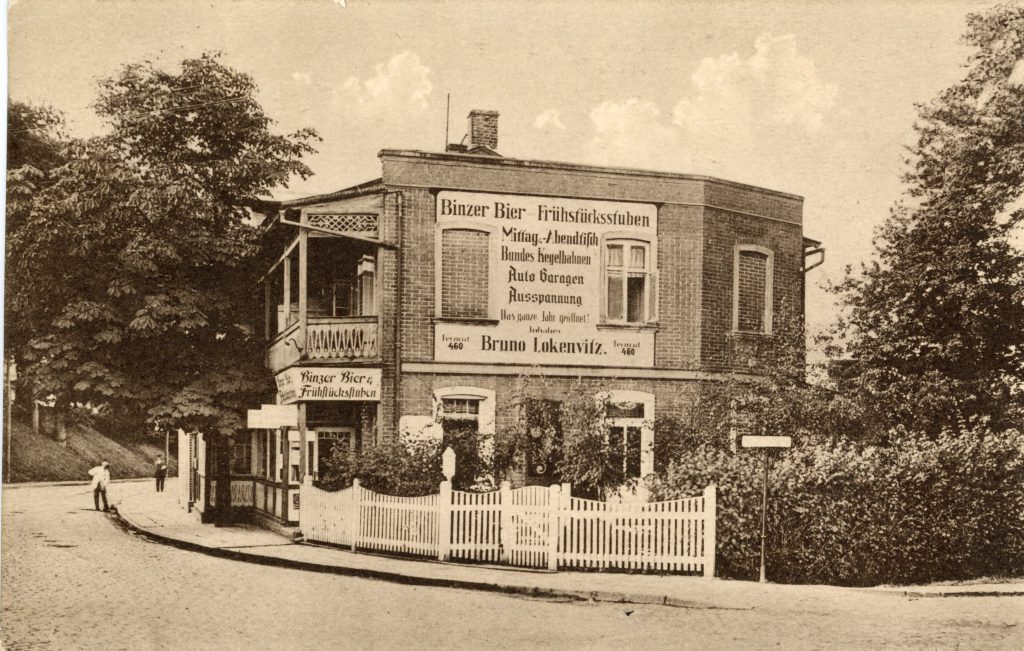 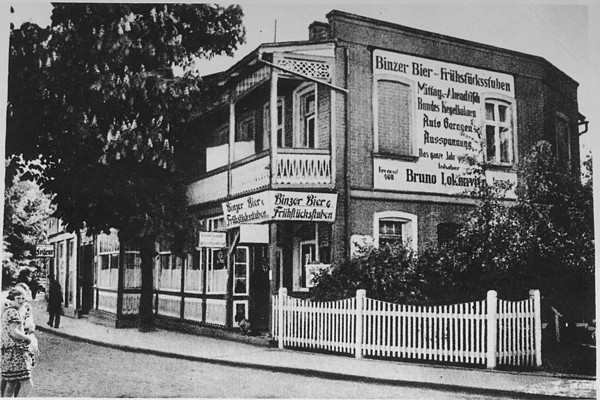 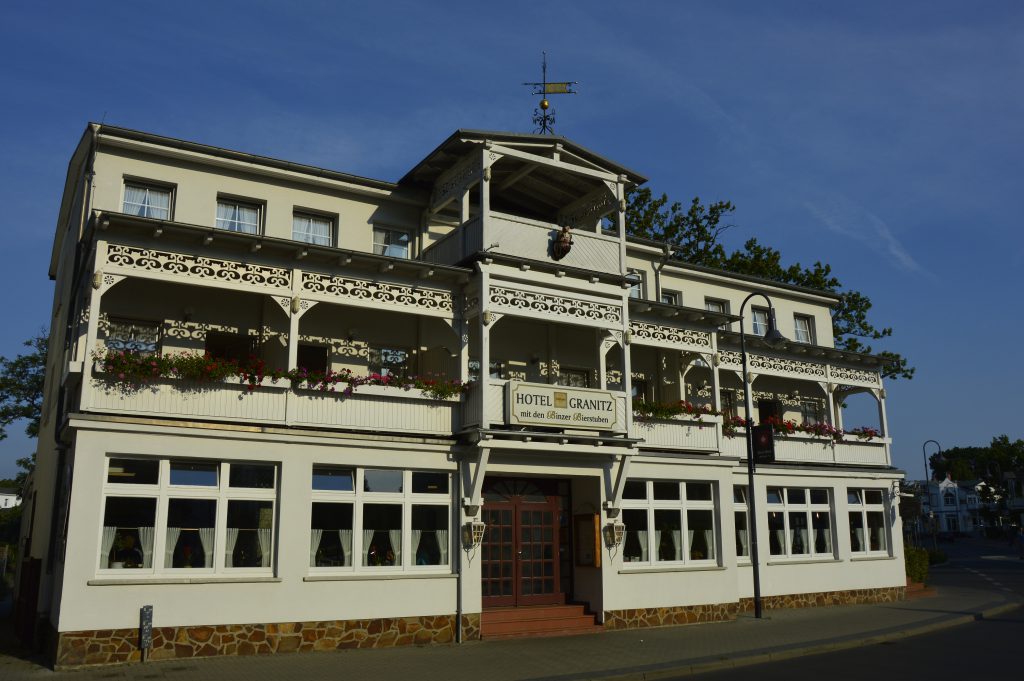 
Formerly known as: Villa Victoria Architecture: This building was constructed just as Binz was beginning the transition from small farming village to seaside resort. The design and materials used are testament to the generally limited financial resources, as evidenced by the brick-infill half-timbered construction, felt roof and wooden balcony. The building is typical of the construction methods of the time. The building’s arrangement with the shop and pub area on the ground-floor and living space and guest rooms above all indicate that it was commissioned by a merchant, a Mr Malchin. Construction: Around 1889 History/proprietors pre-1945: Villa Victoria was most likely built around 1889. Dunker’s 1890 Rügen guidebook features the following notice by Ch. Malchin for his general store: Ch. Malchin, advertisement for groceries, wine and beer business, tobacco and cigar shop, meat and sausage products. Located in the centre of town on the High Street. In 1898, an entry in the directory reads: Christ. Malchin, villa owner and merchant, also with an advertisement under Villa Victoria. In subsequent years too, Malchin carried on promoting both his shop and rooms for let at Villa Victoria, as the following excerpt from the 1905 Binz guidebook demonstrates: Malchin, merchant, banking services, Villa Victoria. All foreign currencies exchanged. In 1909, a Mr Voss took over the villa, followed by Richard Stöckmann in 1917. It changed hands again in 1928, with Bruno Lokenvitz taking ownership. According to the book, In the Name of the Rose: Expropriations on Rügen in 1953, a collection of writings from the Ernst-Moritz-Arndt-Gymnasium in Bergen, edited by Irina Wichert, the story was broadly as follows: Bruno Lokenvitz was born in Binz in 1898 and as a young man left Rügen with his mother and sister. It was due to his love for the island that he returned in 1927 with his wife and two daughters, Inge and Lore. The Lokenvitz family purchased the Binzer Bierstuben, a small inn with 15 tables and space for 80 guests and locals. During the high season, as many as 300 meals were served daily. A bowling alley was located in a room next door. The two upper floors were for the guest rooms and the owners’ private living quarters. The building was plain and simple. And although the guesthouse had only a few rooms and was not located directly on the seafront, there was no shortage of guests. The establishment was always busy. Part of the ground floor of the Binzer Bierstuben building was leased as a grocery. Binz grew quieter during the Second World War. Fewer holidaymakers came, but an increasing number of refugees arrived, who also settled in the Binzer Bierstuben. GDR period: In 1953, the Lokenvitz family were also caught up in Project Rose. Initially, the Binzer Bierstuben was handed over to a trustee. The family’s employees worked hard for them. On their return, Bruno and Martha Lokenvitz received back their guesthouse. Around 1960, as their health deteriorated, they decided to lease the inn to the HO (state-owned hospitality cooperative). They continued to operate a couple of guest rooms. Bruno Lokenvitz passed away in 1970. A few years later, his wife sold the Binzer Bierstuben to the Poseritz LPG (agricultural production cooperative) for accommodation for holidaymakers. (Quoted in part from the book In the Name of the Rose: Expropriations on Rügen in 1953, a collection of writings from the Ernst-Moritz-Arndt-Gymnasium in Bergen, edited by Irina Wichert.) Post 1990: In 1992, the Binzer Bierstuben was thoroughly refurbished while retaining the building’s character, and reopened as the Hotel Granitz. The hotel has been closed since the end of 2019. Since summer 2020 there has been an Indian restaurant in the rooms of the “Binzer Bierstuben”. The hotel is open again. Current use: Restaurant on the ground floor