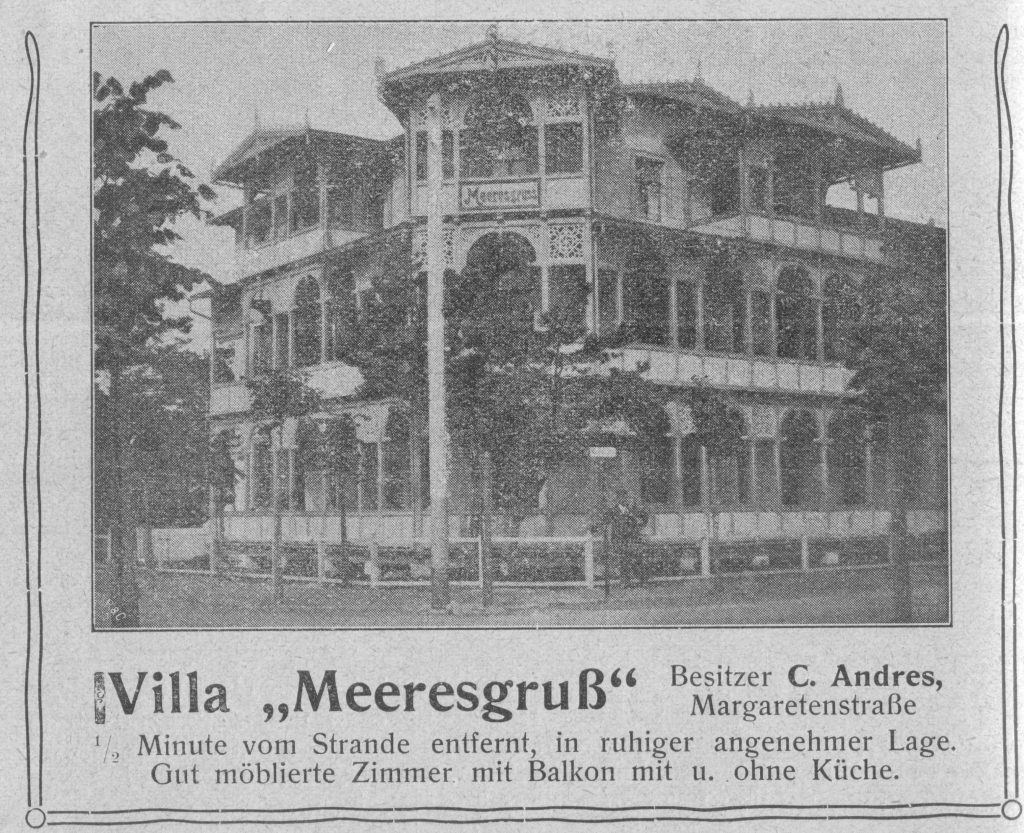 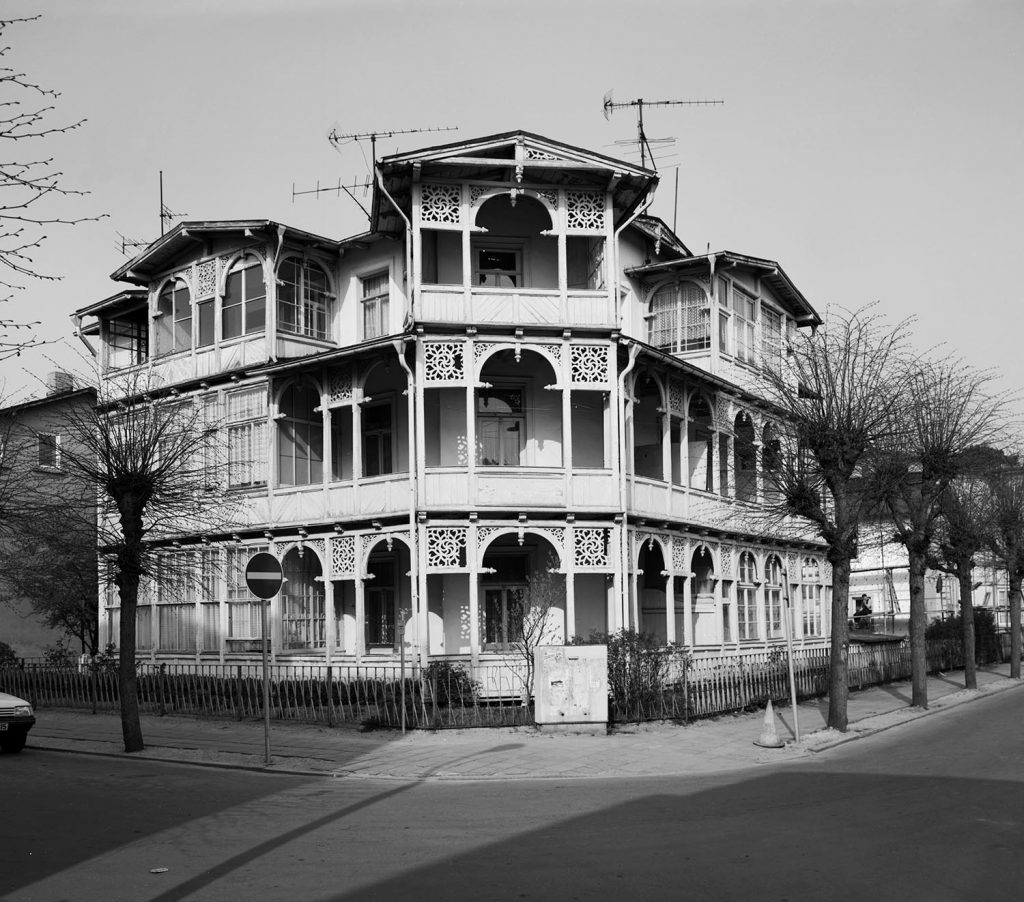 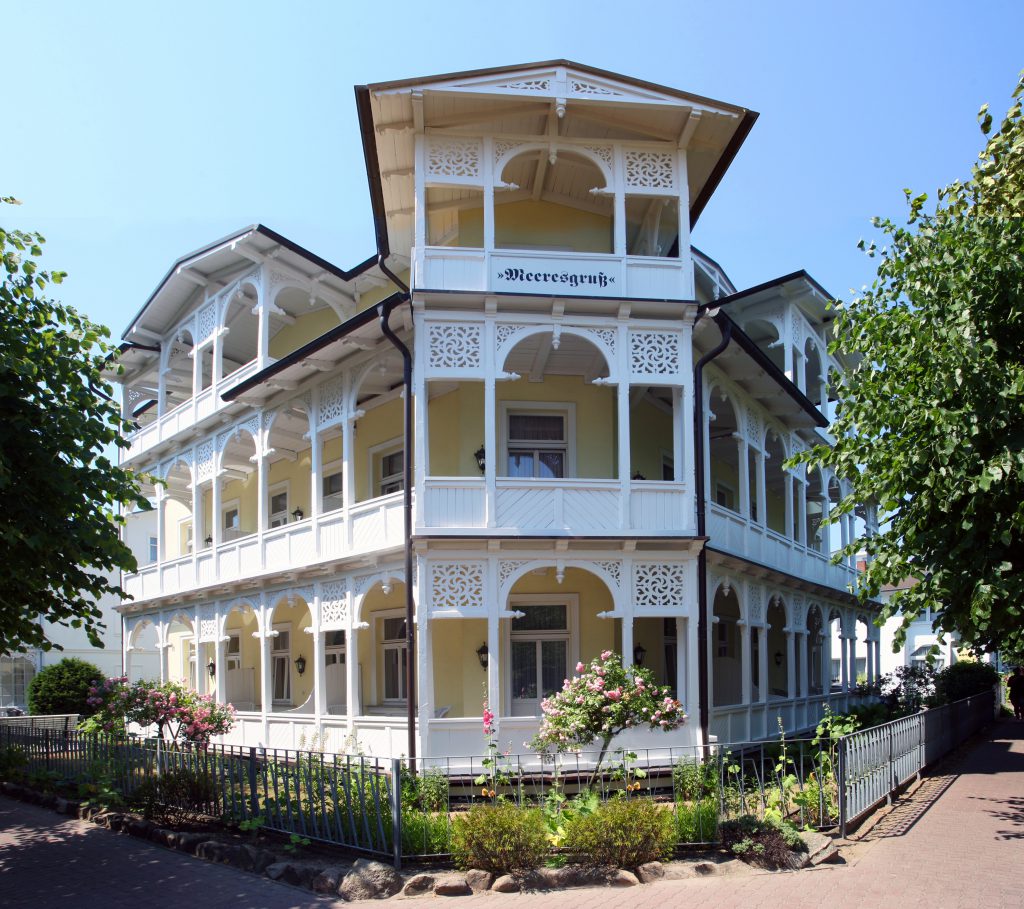 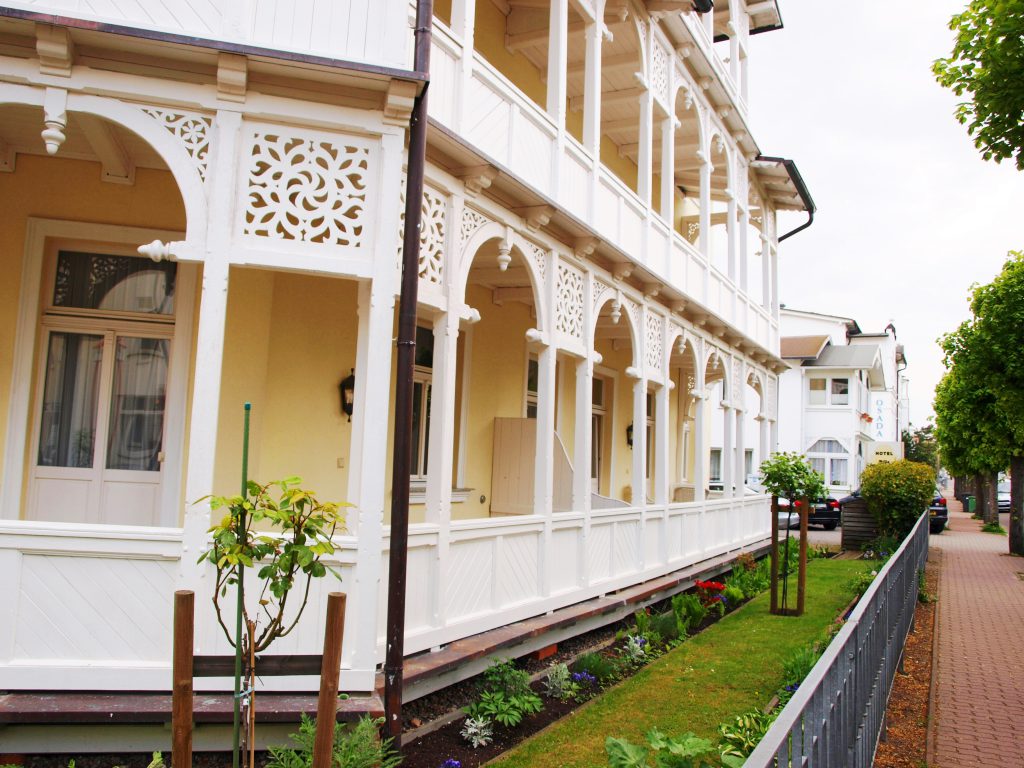 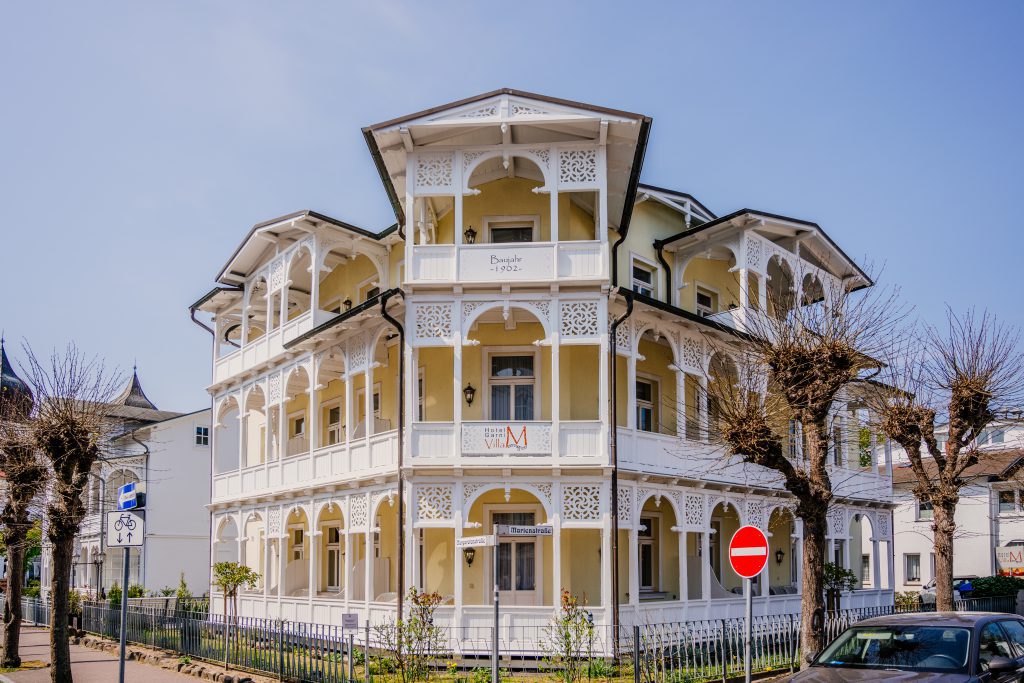 Formerly known as: no previous names Architecture: In their book Pomeranian Resort Architecture, Wolfgang Schneider & Torsten Seegert describe the property as follows: This building, too, bears certain unique stylistic features owing not least to its corner location. The basis is a three-storey solid construction with large loggias in front. The main body consists of two wings set at right angles to one another, connected together by a diagonally-oriented single-section corner front. The gabled roof points toward Lottumstrasse and is finished with a small decorative feature. The central entrance is located to the rear of the building. Construction: 1902 History/proprietors pre-1945: Hans Carl and Friederike Andres received the first guests to the Haus Meeresgruß guesthouse in 1903. The 19 bedrooms and kitchen-cum-living room were let out over the summer months to holidaymakers from all over Germany. The rooms varied in size and featured connecting doors, allowing individuals to be accompanied by their own domestic staff. The basement kitchen was connected to the rooms via a lift, facilitating room service whenever meals were desired. For a carefree stay at the seaside, more than 100 Strandkörbe (traditional hooded seaside basket chairs) were provided by the property to rent. The Andres family were blessed with two children: a daughter, Elli, and a son, Bruno. Bruno continued the family tradition as a fisherman, working as a taxi driver on the side. His wife Hedwig supported her parents-in-law with running the guesthouse. Bruno wasn’t to return from the war in 1945; his wife died of typhoid the same year. GDR period: Bruno and Hedwig’s three children grew up with their grandparents, Hans Carl and Friederike. The Haus Meeresgruß became another of the many locations where refugees were quartered. Five unheated were still available for private lets during the summer months. In 1949, these rooms too, had to be ceded to the Free Federation of German Trade Unions’ travel agency. In order to escape Project Rose, grandmother Friederike fled with one grandson to the German Federal Republic for a year. On her return, she received back her property,however Friederike Andres let very few rooms out for the travel agency. Following her death in 1964, her granddaughter continued the work until 1990. The remaining rooms were used for residential purposes. The building was heritage listed in the late 1980s. Post 1990: In 1991, the property was sold by its inheritors to investors from Hamburg who renovated the building. In October 1994, the property was opened as a hotel, operating as part of the Centralhotel chain until 2015. Since March 2015, the hotel has been run by Julia and Thomas Adrian. Current use: Privately-run bed-and-breakfast hotel. Fascinating fact: The Villa Meeresgruss has balconies running all along either side, one of the building’s distinguishing features. The old staircase is also very attractive.