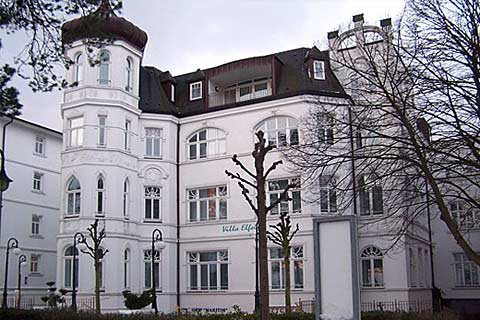 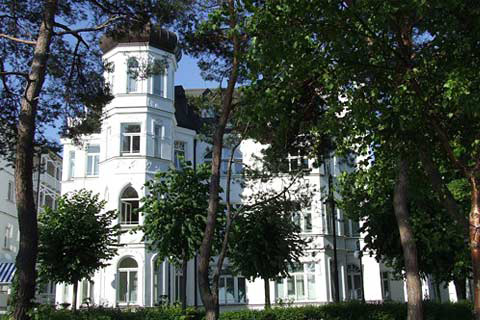 
Formerly known as: Villa Tip-Top, Haus Hindenburg Architecture: This villa demonstrates a number of Jugendstil features. The façade is designed asymmetrically, while the tower bears various relief-like sections.  Construction: 1906 History/proprietors pre-1945: An advertisement in the 1911 Binz Guidebook refers to the following: ‘Villa Tip Top, premium-quality lodging house. Newly constructed in 1906 and equipped with every convenience’. The proprietor is named as a Mr M. Markwardt. From 1907, the villa regularly featured in the accommodation indexes. In 1912, the Elfeldt sisters purchased the villa, initially retaining the name Tip Top. In 1915, however, Villa Tip Top became Haus Hindenburg. Elisabeth Elfeldt continued running the property as a guesthouse until the end of the war. GDR period: As with the majority of these buildings, refugees were accommodated here in 1945, subsequently becoming ‘long-term tenants’. Expropriation and Mrs Elfeldt’s later ‘unofficial’ departure for West Germany resulted in the reallocation of the property to the municipality of Binz. As a consequence, the guesthouse became residential accommodation. Post 1990: Following reunification, Cologne tax consultant Willi Plattes purchased the villa and had it converted into a block of studio flats in accordance with the requirements of its protected status. Now renamed Villa Elfeld, guests have once again been staying at the property since 1997. Current use: Seaside villa with holiday apartments Fascinating fact: In 1914, the property was even celebrated in verse in an advertisement as follows:  Neatly ‘twixt bathing for women and men Away from the hustle, but not far from them Family and sunbathing neither too farAt Tip Top’ summer’s supreme, wunderbar! Elegant fittings, electrical light, With a view that’s unrivalled, a beautiful sight. Light, airy rooms and at everyman’s price.