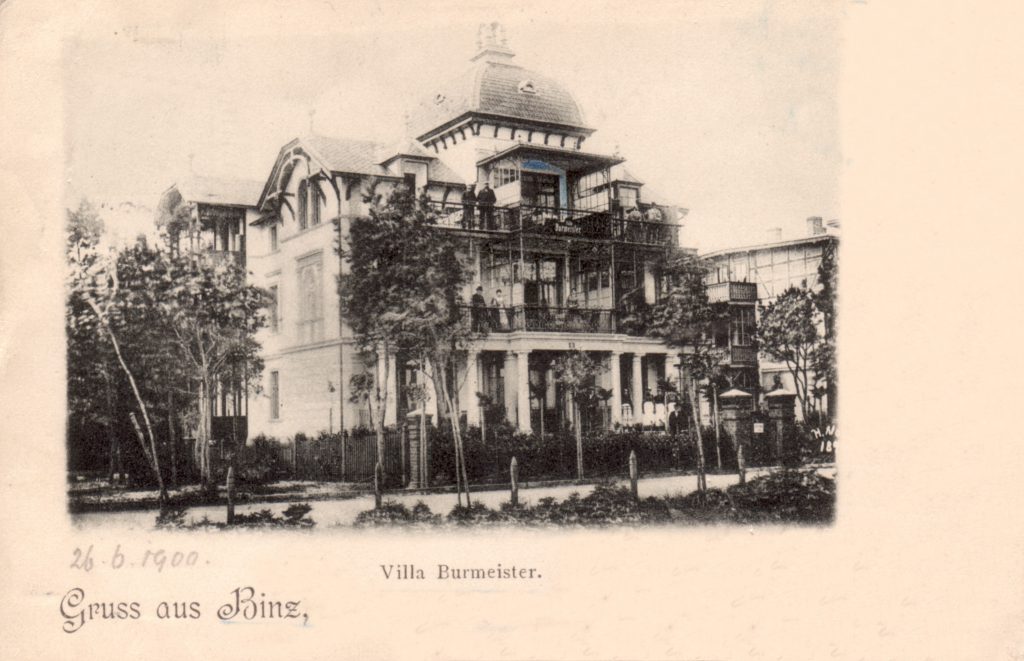 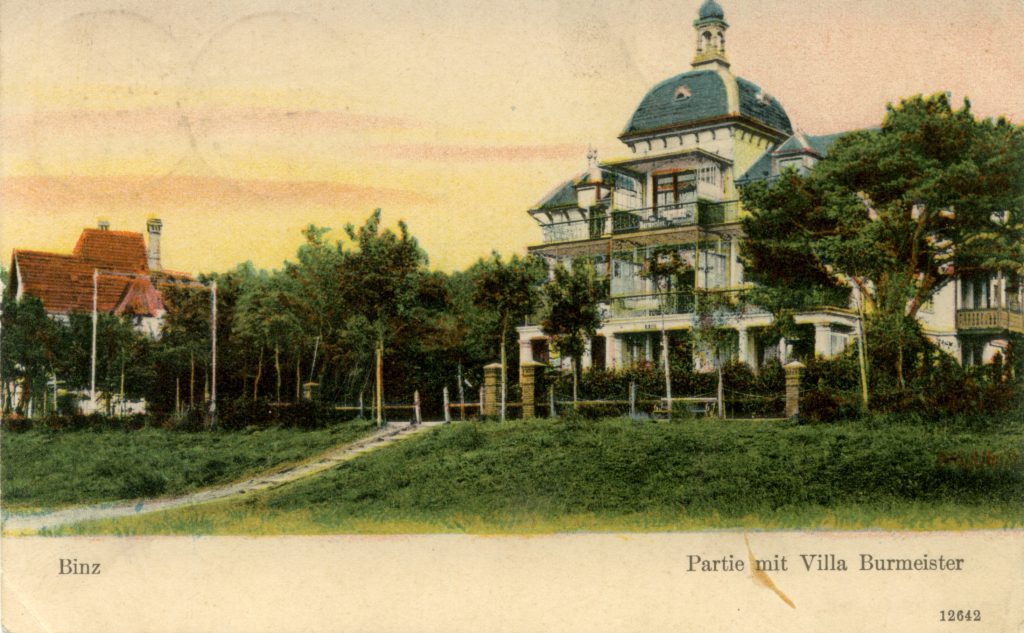 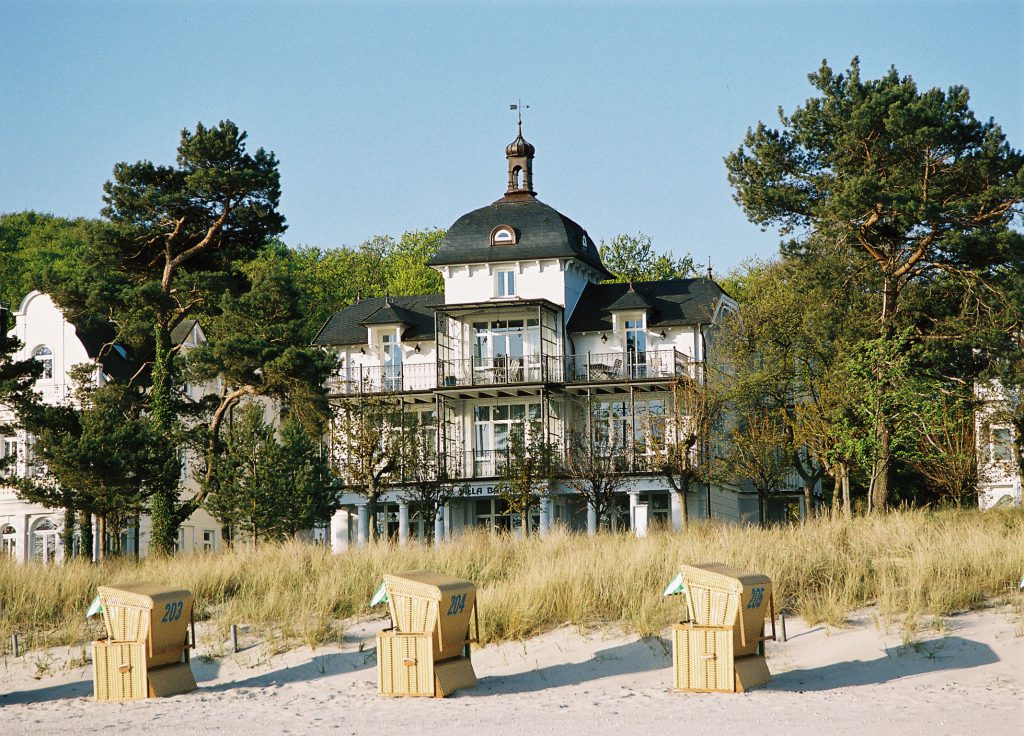 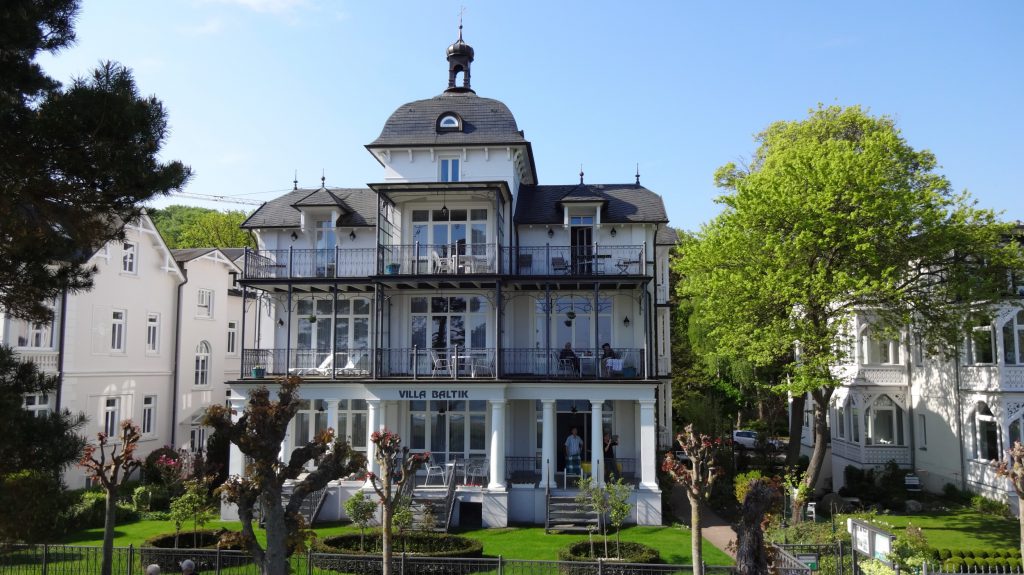 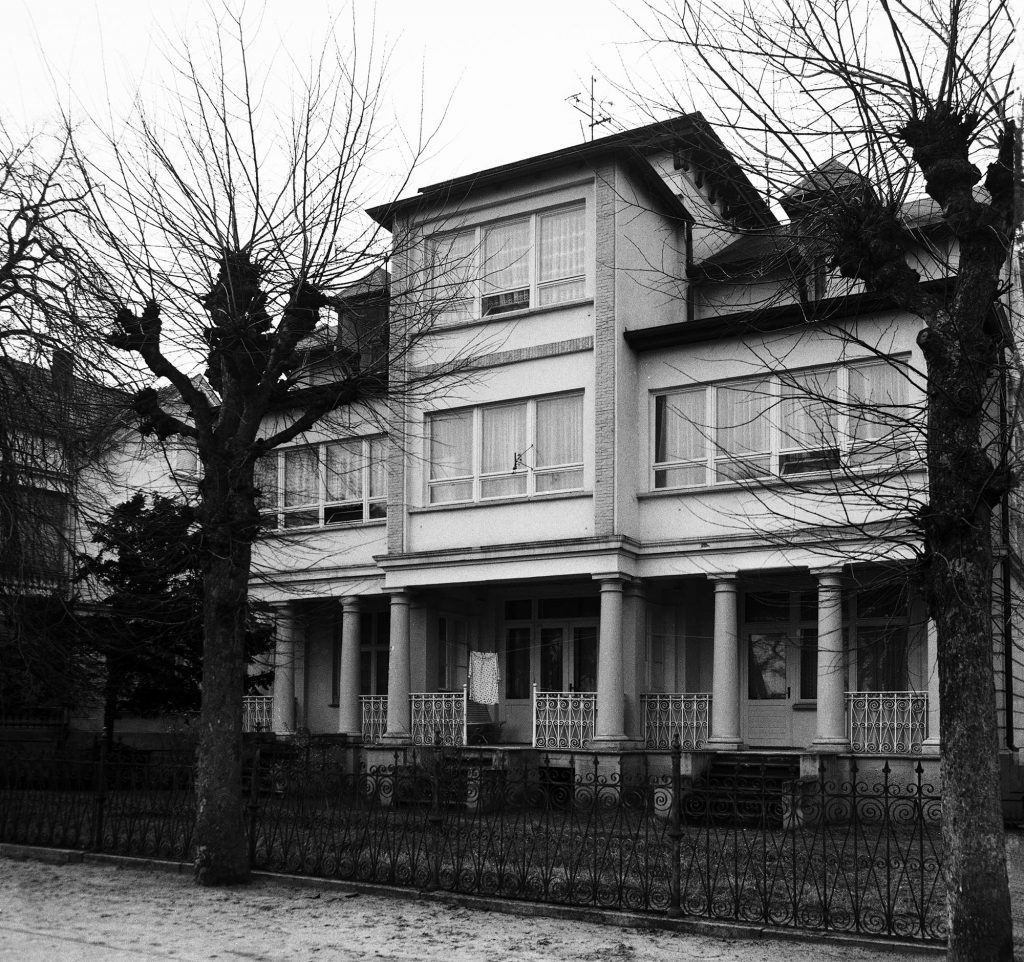 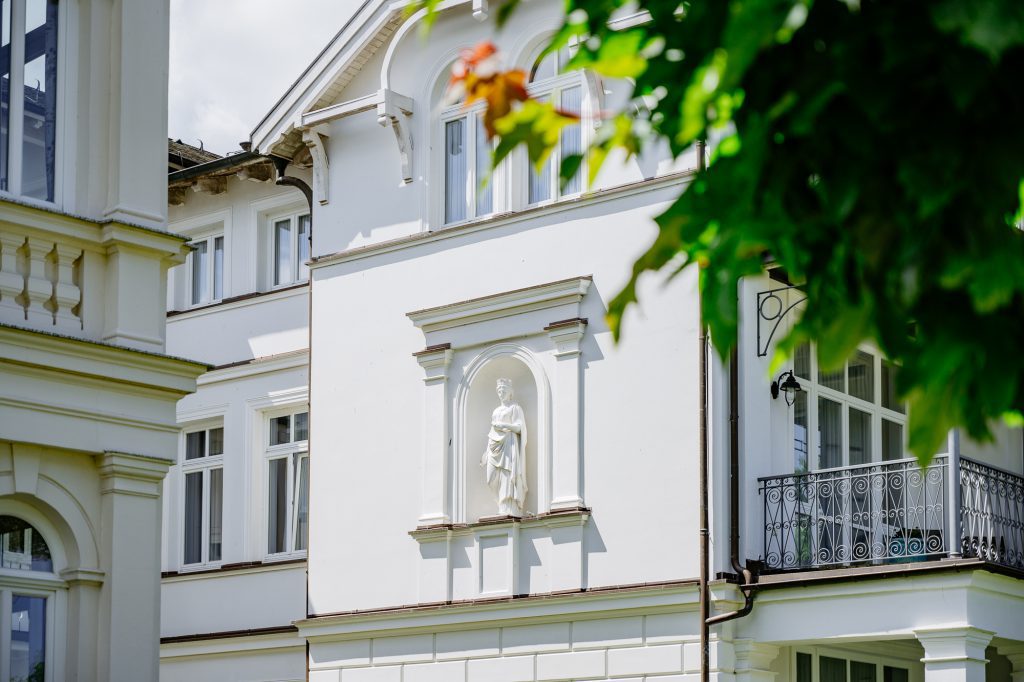 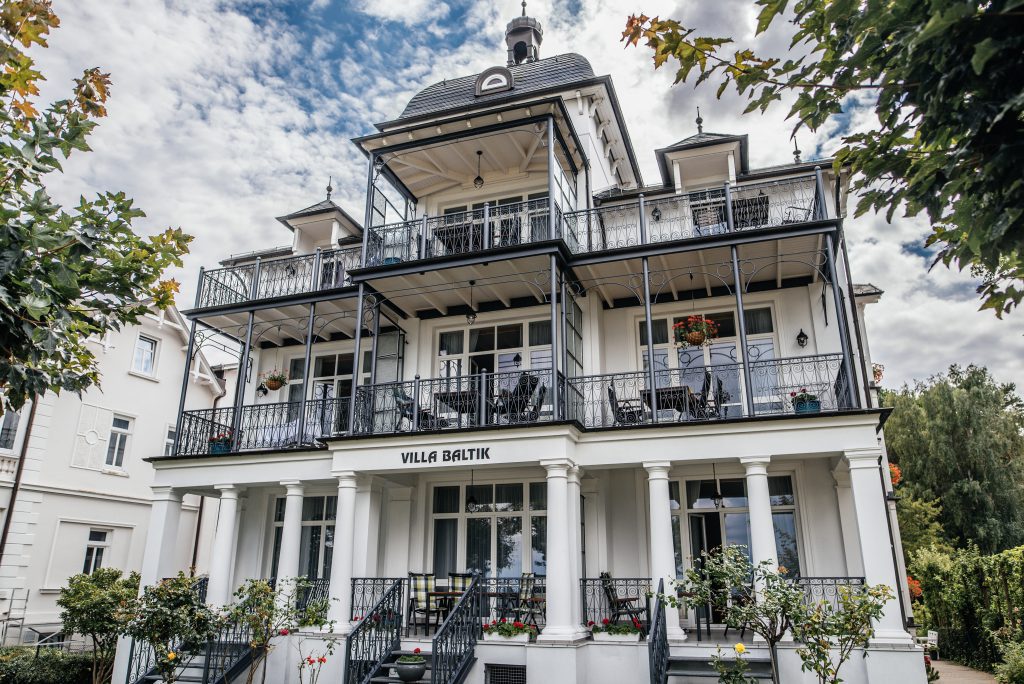 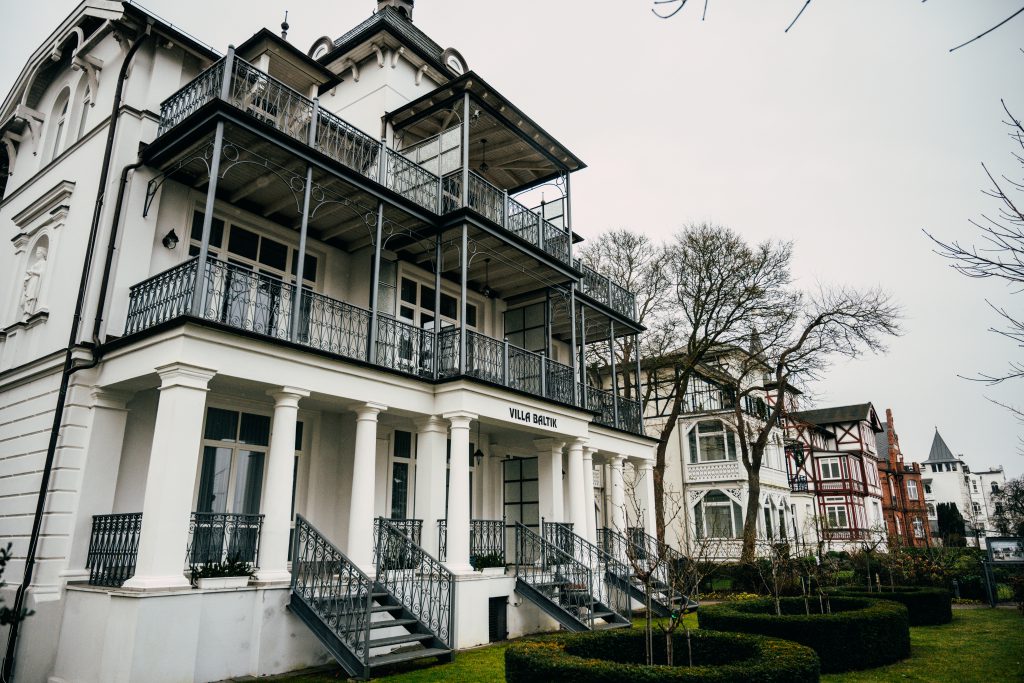 Formerly known as: Villa Burmeister, Villa Baltic Architecture: Elegant triaxial construction with a portico, creating a portal-like impression. The middle avant-corps forms a tower-like central structure, flanked by two caps. One of the building’s distinctive features is the inclusion of iron balcony railings instead of the usual wooden loggias, which mirror the form of the garden fence in the two upper stories. Two female figures adorn each side of the building, holding books in their hands. These are the so-called Sapientia (from the Latin for wisdom). This impressive villa remained unparalleled following the promenade’s subsequent development. Today, it forms a distinctive contrast to the buildings around it. Completed: 1888 History/proprietors pre-1945: The Villa Baltik was opened in 1888 as a premium lodging house belonging to master builder Georg Burmeister of Putbus. In 1904/5, his son Otto sold the villa to a Mr Wittmüss, who himself sold it to one Mr Malchin in 1909. From 1911 onwards, the housing registry names the owner as Hermann Behrens, who was also responsible for the villa’s change of name in 1922 to “Baltic”. He was followed as proprietor by spa owner Adalbert Kaba-Klein and, subsequently, his brother-in-law Klein-Lemo. A 1928 guide (The Baltic Coastal Resort Binz on Rügen – Practical Tips) provides the following description of the Villa Baltic: Villa Baltic, directly on the promenade. Premium guest house. Rooms with balcony and sea view. First-class Viennese cuisine. In the early 1930s, the building was leased to the wife of cavalry captain Eggers. As the war approached its end in 1945, she fled westwards from the advancing Russian army on one of the last of the “Strength Through Joy” Nazi cruise ships together with her family.  GDR period: Following its expropriation (in 1953 under Project Rose), the building was transferred as nationally owned property to the municipality, which used it as residential accommodation until 1993. After 1990: In 1994, Peter and Karin Löw and family purchased the building and began renovating the villa. They welcomed their first guests in 1997. Current use: Privately-operated holiday apartment block. Fascinating fact: The villa was the third building to be built on the promenade and is Binz’s oldest remaining guest house after Villa Undine.