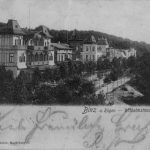 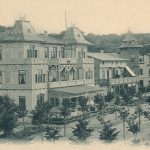 Architecture: This building was the first hotel on Wilhelmstraße. The front façade of the half-timbered construction consisted in a veranda with three balconies above, flanked by two towers. It was a typical example of the construction methods in Binz at the end of the 19th century. Inexpensive pine was used for the porches, the formation of which required correspondingly minimal effort.

History/proprietors pre-1945: One Mr Gustav Leue opened his Hotel zum goldenen Löwen (Golden Lion Hotel) with a restaurant, wine bar and ‘30 elegantly appointed bedrooms’ in July 1890. In 1897, he sold it to Gottlieb Buttermann, who ran it until 1945. Advertisements promised the guest ‘bourgeois elegant charm in this hotel of the highest renown…’ Principal among the guests in the summertime were officers and high-ranking officials who gathered regularly for social events in the restored main hall (today’s brasserie).

GDR period: During the GDR period, the property was used as a guesthouse and restaurant as part of the state-owned HO network of restaurants and businesses. The discotheque was popular with young people, but Binz’s older citizens were also drawn to the Faß (Keg), a popular night spot. From 1984, Andreas Wilhelm ran the premises.

Against the backdrop of a business partnership, the Zum goldenen Löwen and Vineta hotels joined forces on 1 January 2001, adopting the new name Loev Hotel Rügen. For several years, the two owners ran the hotel together. Since November 2009, both properties are now in the possession of the Kurowski family. Sale of the two houses at the end of 2017.

Current use: resort hotel with restaurant and bar

Fascinating fact: The Loev Hotel Rügen is an amalgamation of two Binz properties that have both been in existence since the days of German industrial expansion in the late 19th century (die Gründerzeit): the Haus Vineta is the site of the hotel’s reception, while the Haus Goldener Löwe hosts today’s brasserie.