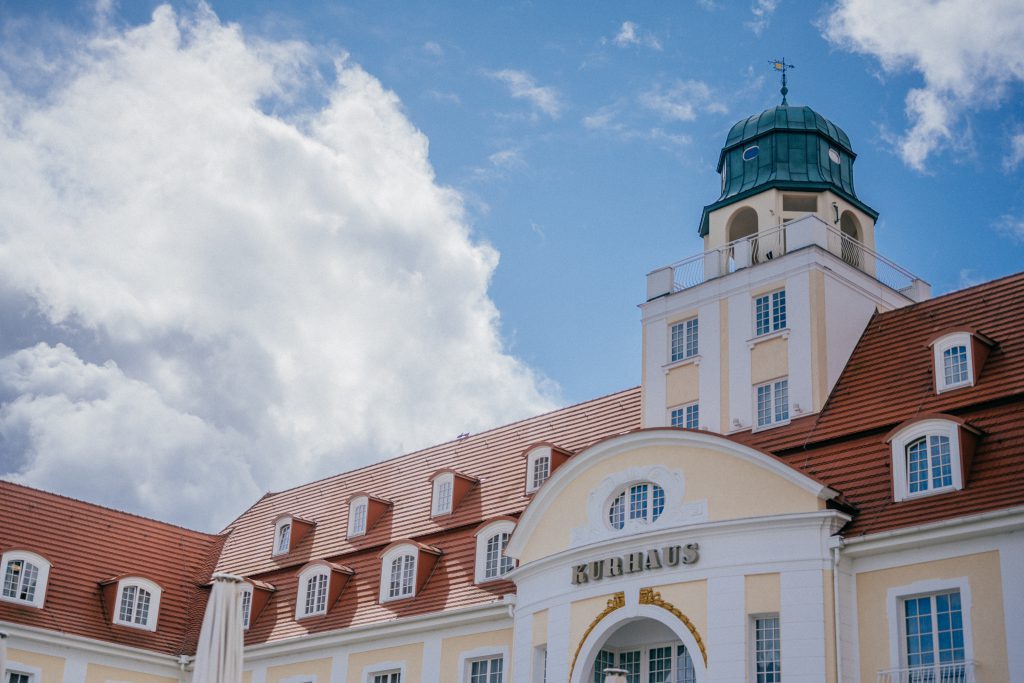 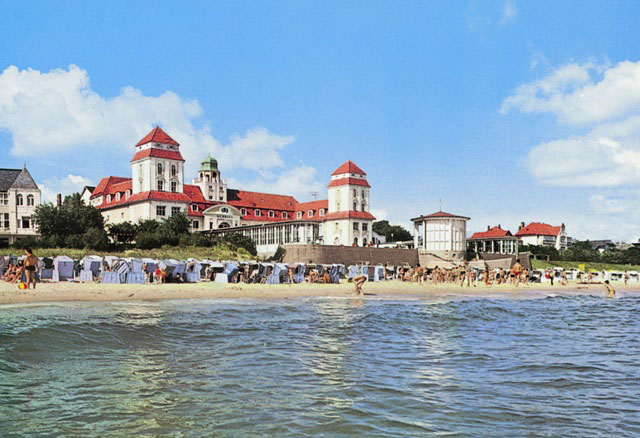 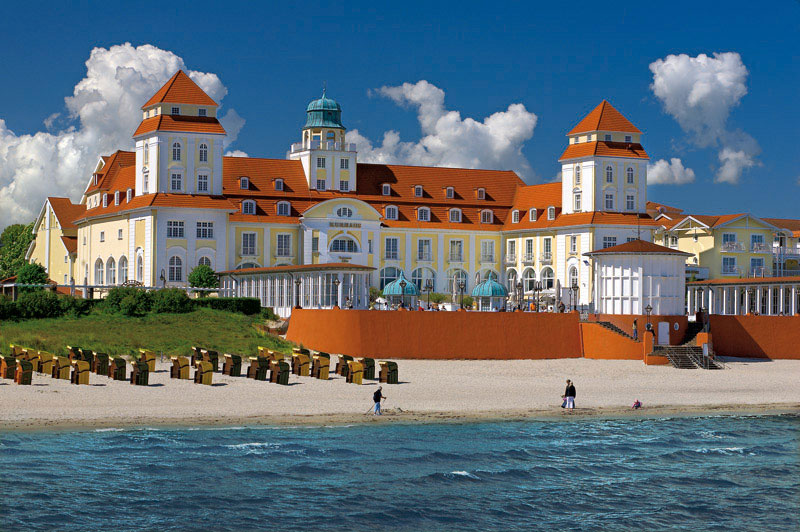 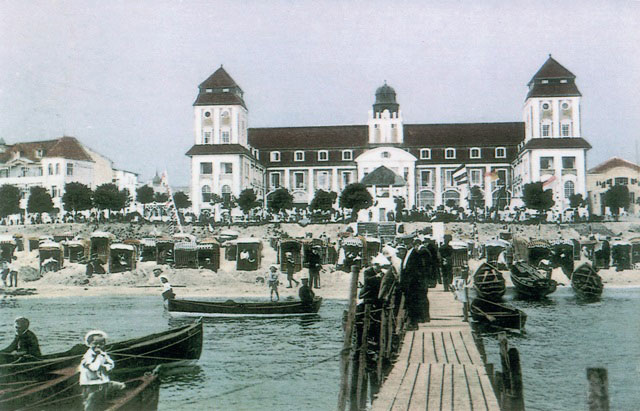 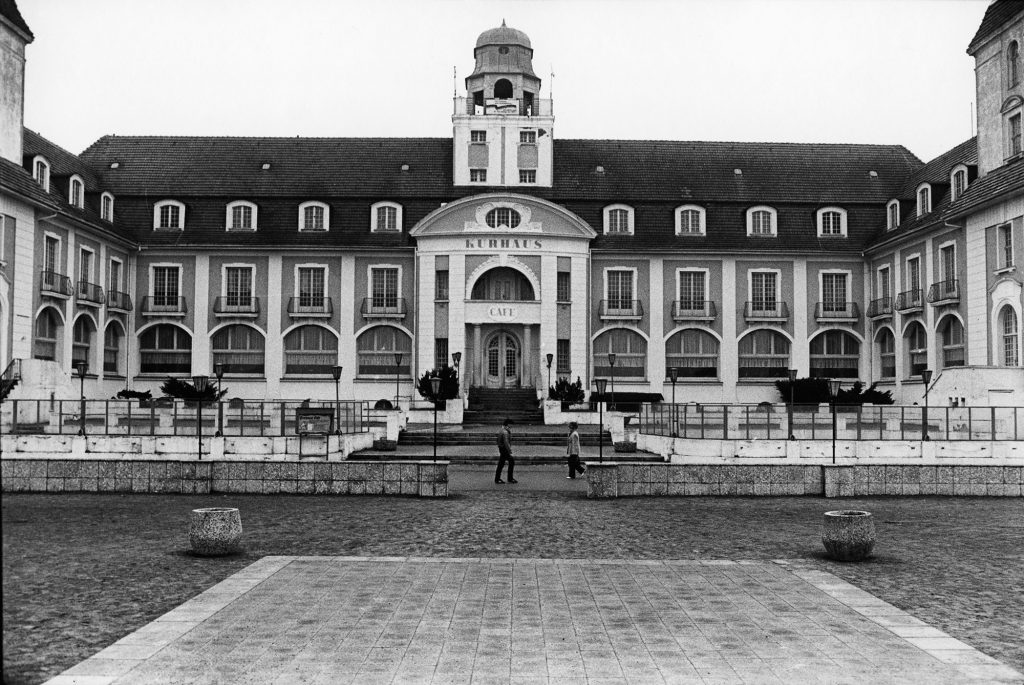 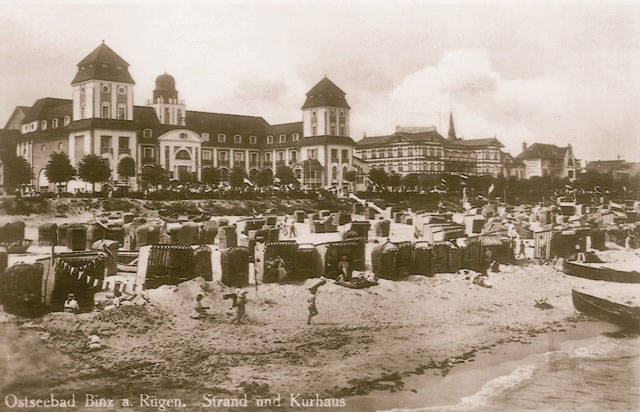 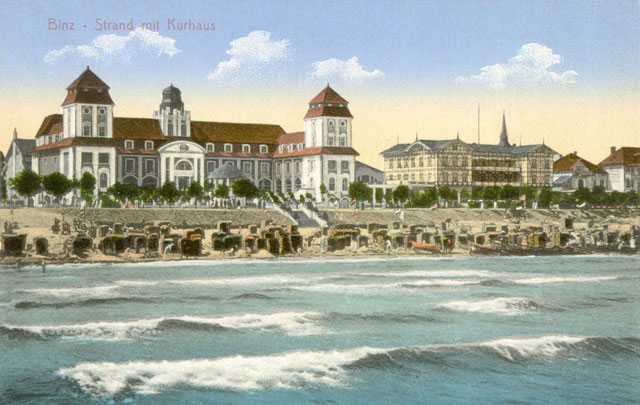 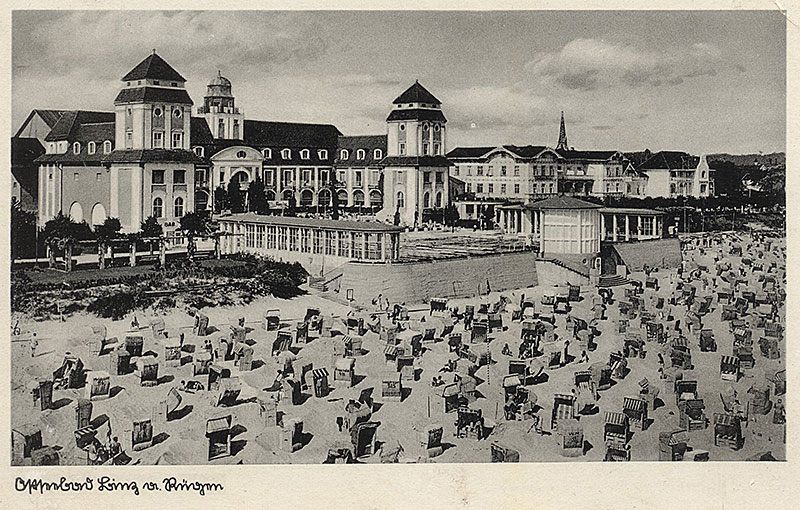 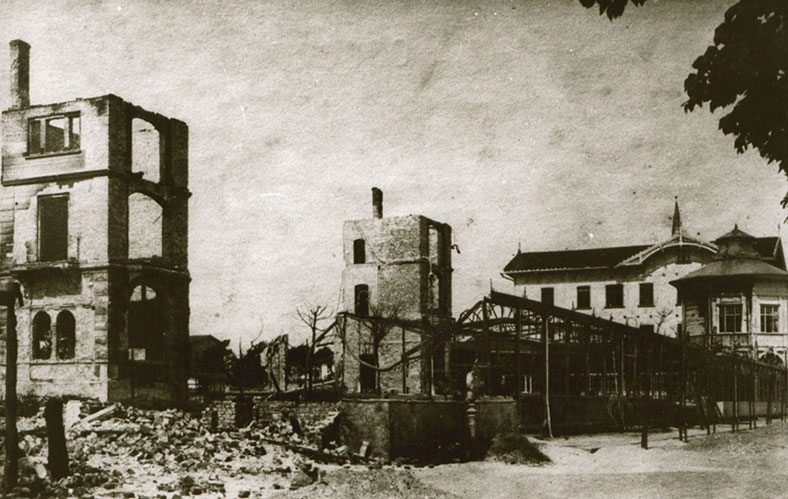 Formerly known as: no previous names Architecture: The architecture of the current Kurhaus is based on plans by Berlin-based architect Otto Spalding. It’s been shaping the Binz skyline with its towers and imposing style since 1908. Opened: 1890, 1908 History/proprietors pre-1945: Berlin bankers invested in the resort’s development. The first, half-timbered Kurhaus was opened on 22 July 1890, but fell victim to a serious fire on 1 May 1906. The new stone Kurhaus, which can still be seen today in all its glory, celebrated its grand opening on 3 July 1908 and grew to become the social centre of the Binz. It was mostly guests from Hamburg and Berlin who stayed here and sauntered around. As a result of the consequences of World War One and inflation, the municipality of Binz sold the Kurhaus together with the neighbouring Hotel Kaiserhof to a group of investors led by Adalbert Kaba-Klein. In the so-called Golden 1920s, the flourishing Kurhaus drew doctors, lawyers and industrialists in particular with its casino, music hall and Cockatoo Bar. In light of his Jewish background, Adalbert Kaba-Klein was dispossessed by the Nazis. The Kurhaus was sold to German statutory trustees in 1938. Visitor numbers sank as a result of the Second World War. GDR period: After 1945, the Kurhaus was reassigned to Kaba-Klein, its former proprietor. Russian soldiers and refugees were quartered there. In 1953, Adalbert Kaba-Klein was once again dispossessed under Project Rose. The National People’s Army took over the Kurhaus in 1955 as a holiday home for officers and long-serving soldiers. From 1961, the Kurhaus remained under the direction of the GDR state travel agency, with actors, scientists and captains of industry, among others, as guests. The large terrace, The Binz Balcony, was once again run as a restaurant. Every major event on the island of Rügen was hosted in the Kurhaus Hall. Post 1990: Following reunification, the Kurhaus came under the ownership of the Travel Group in Berlin, newly-formed from the old travel agency hotels. Resort Hotel GmbH purchased the hotels from the trustee, with Travel Charme GmbH taking on their operation. Between 1997 and 2001, the Kurhaus was reconstructed in keeping with Otto Spalding’s original architectural plans, modernised internally, and the Kaiserhof rebuilt. Since December 2001, the Kurhaus and Kurhaus Hall can again be appreciated in all their new-found glory, and feature, together with the celebrated chalk cliffs, among the distinguishing landmarks of the island of Rügen. Current use: Premium holiday hotel with restaurants, a café with its own in-house cake bakery, a bar and an extensive spa. Fascinating fact: In August 2012, in memorial of the fate of Adalbert Kaba-Klein and his partner proprietors, four Stolpersteine (cobblestone monuments) were installed on the promenade in front of the Kurhaus terrace.