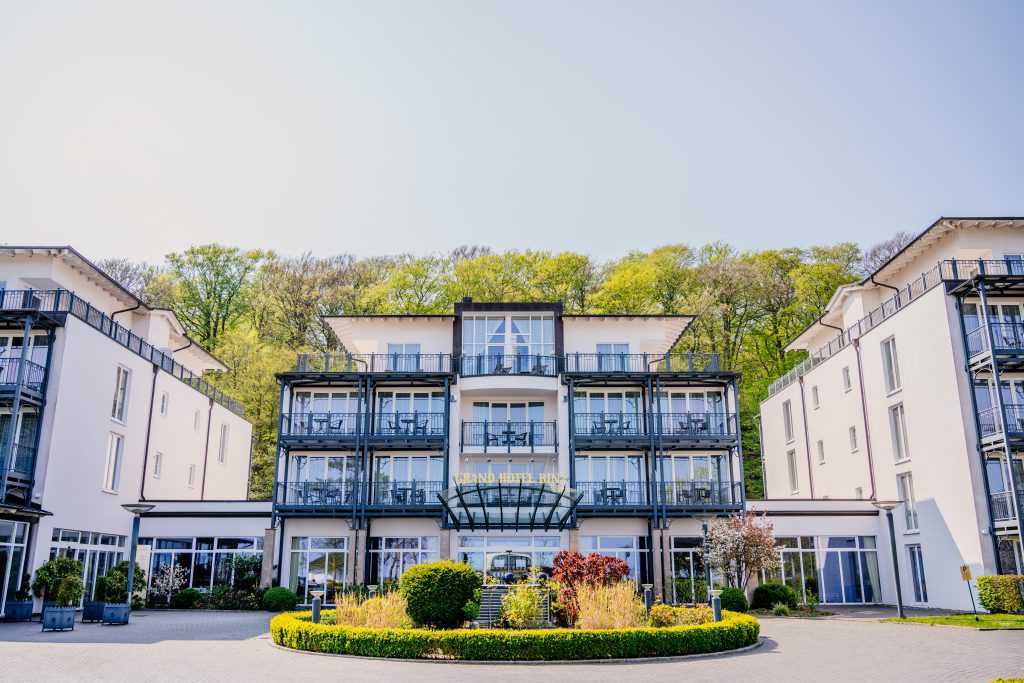 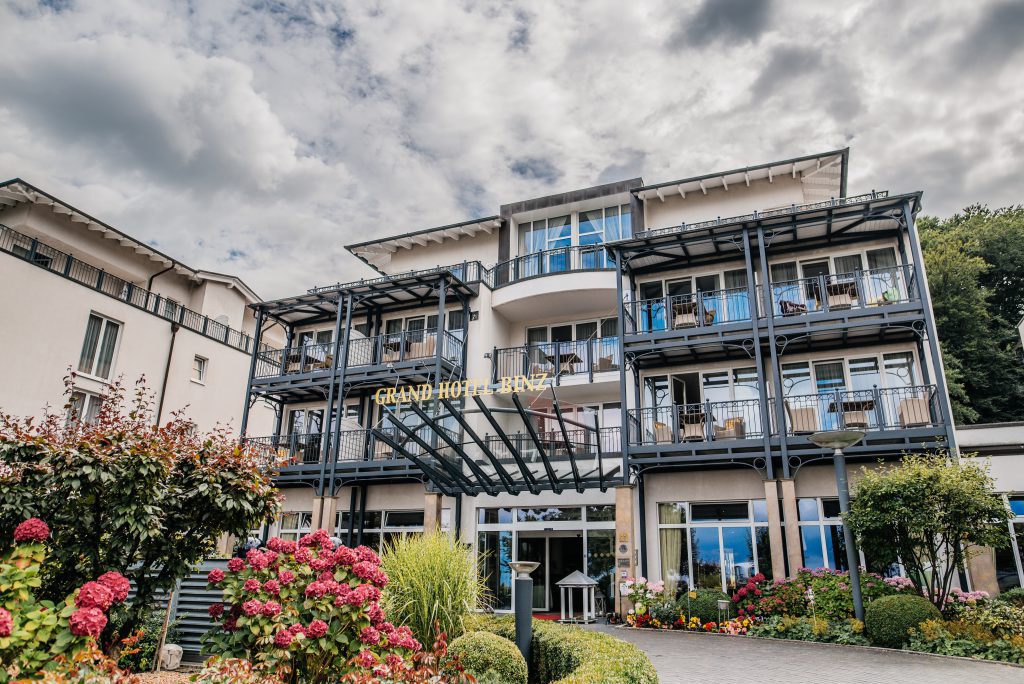 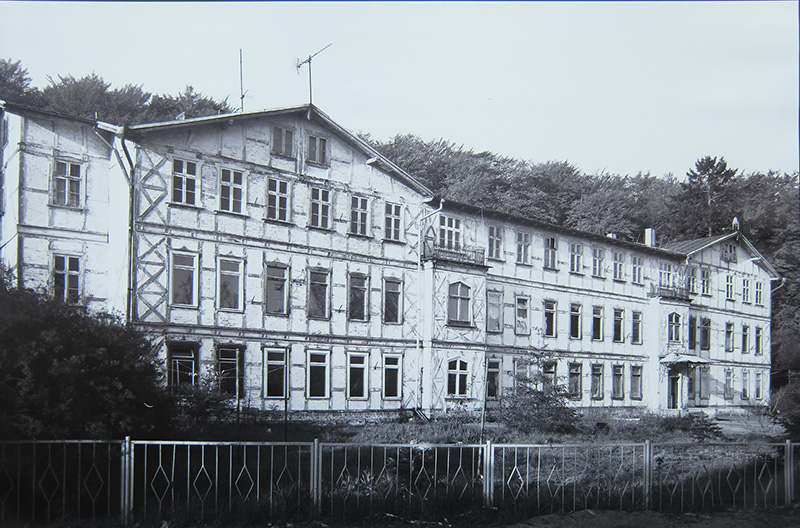 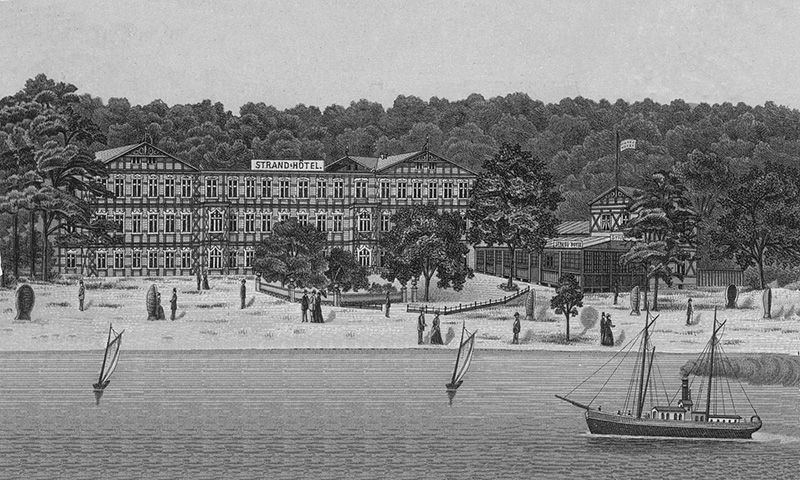 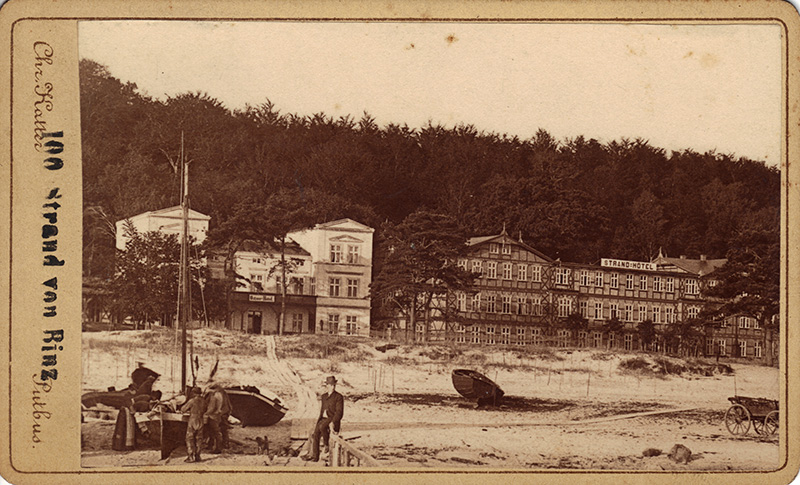 Formerly known as: Klünders Strandhotel Architecture: Klünder’s ‘Strand-Hotel’ (‘Beach-Hotel’) was a half-timbered construction in the Swiss style. In 1883, it had only one upper storey and a simple façade nine windows wide, with no projecting structures or other distinguishing stylistic features. A separate restaurant building in the style of a Scandinavian hall, including a veranda and beer garden, also belonged to the property. By 1886, the building had reached its eventual size of 21 windows wide and with two upper stories. The current Grand Hotel Binz, which replaced the original Strandhotel, consists of four structures joined at the ground-floor level. The different façades are clearly distinguished from one another by the wrought-iron balconies in front of them, and are painted in the white colour typical of seaside health resorts – a modern variation of resort architecture. Construction: 1883 History/proprietors pre-1945: In 1883, Wilhelm Klünder opened the first seaside hotel on the site of the current Grand Hotel Binz. It was this ‘Strandhotel’ that initiated Binz’s beachside development, thus making Klünder the resort’s founder. Even after the property’s sale in 1893, it continued to serve as a hotel/boarding house until the end of World War Two. GDR period: After the war’s end, the property followed the pattern typical of so many buildings: it was initially used for housing refugees, then confiscated, then the ground floor was used in summertime as a restaurant by the FDGB (Free Federation of German Trade Unions) and as a winter shelter for Strandkörbe (traditional seaside hooded wicker chairs) as well as residential accommodation for the municipality. Post 1990: Following the property’s retrocession to its owners, it was sold to an investor, Strandhotel Binz Gbr. The Strandhotel was demolished on 7 December 1994. After an extended period of construction, the new building was opened on 1 June 2000 as Binz’s second five-star hotel, and operated by the Kempinski luxury hotel group. After the shareholders in the proprietor company (Strandhotel Binz Gbr) suffered personal bankruptcy, the property was auctioned in July 2006. On 1 August 2006, it was taken over by Hotel Arkona Dr. Hutter e.K. and has since been run as the Grand Hotel Binz. Current use: Luxury resort hotel. Fascinating fact: After the first road connecting the old village and the beach (today’s Putbuser Straße) was completed in 1876, Wilhelm Klünder built the first hotel near the beach, the Strandhotel, on the site of the current Grand Hotel Binz. It was thus Wilhelm Klünder who founded the present resort on the Baltic coast.