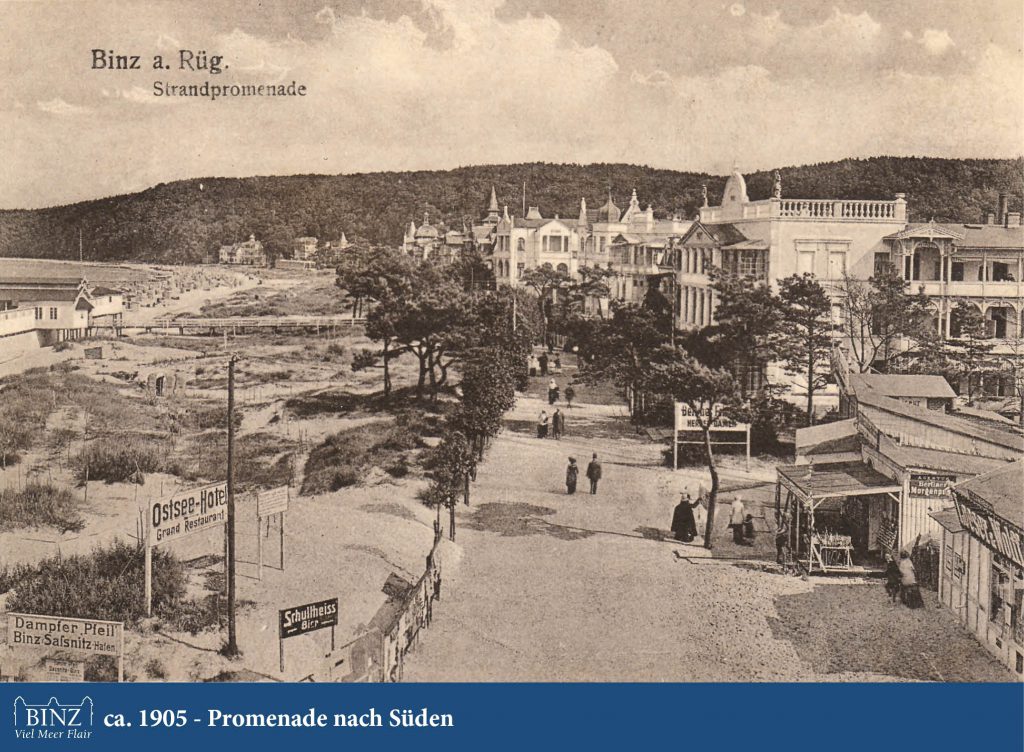 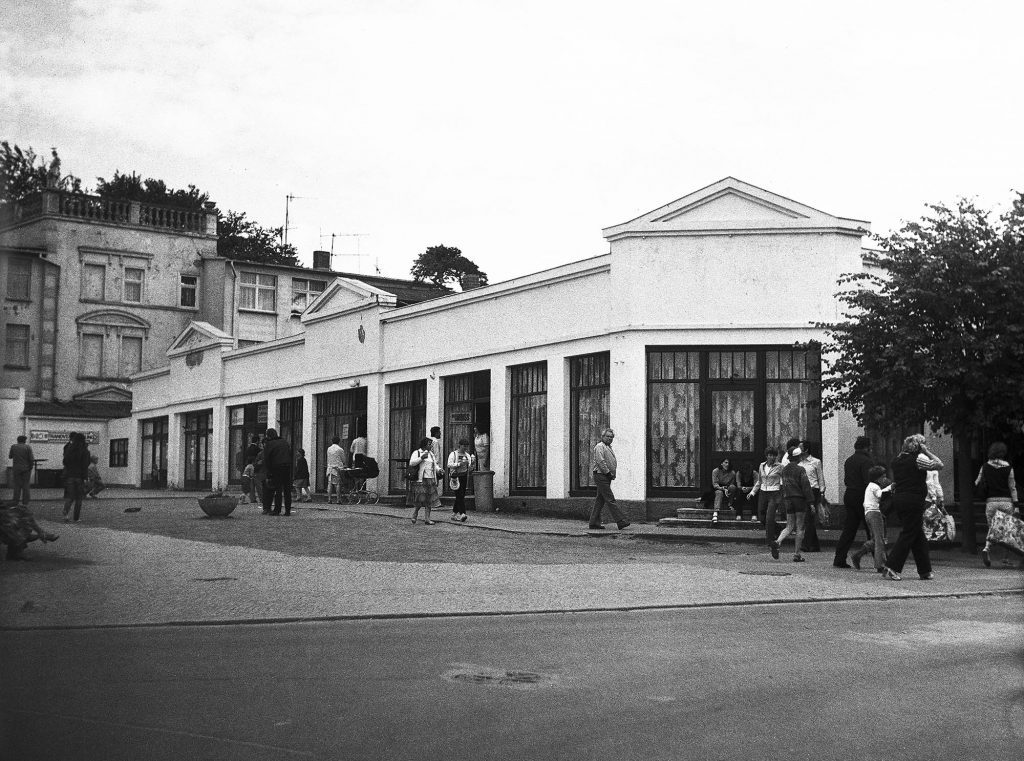 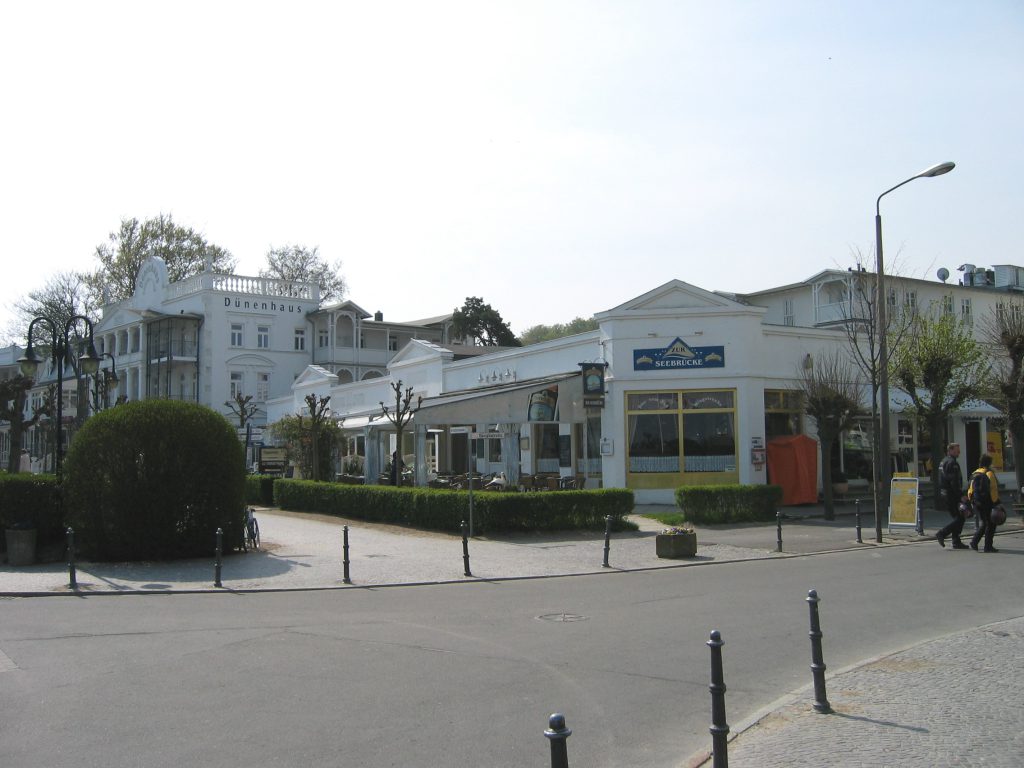 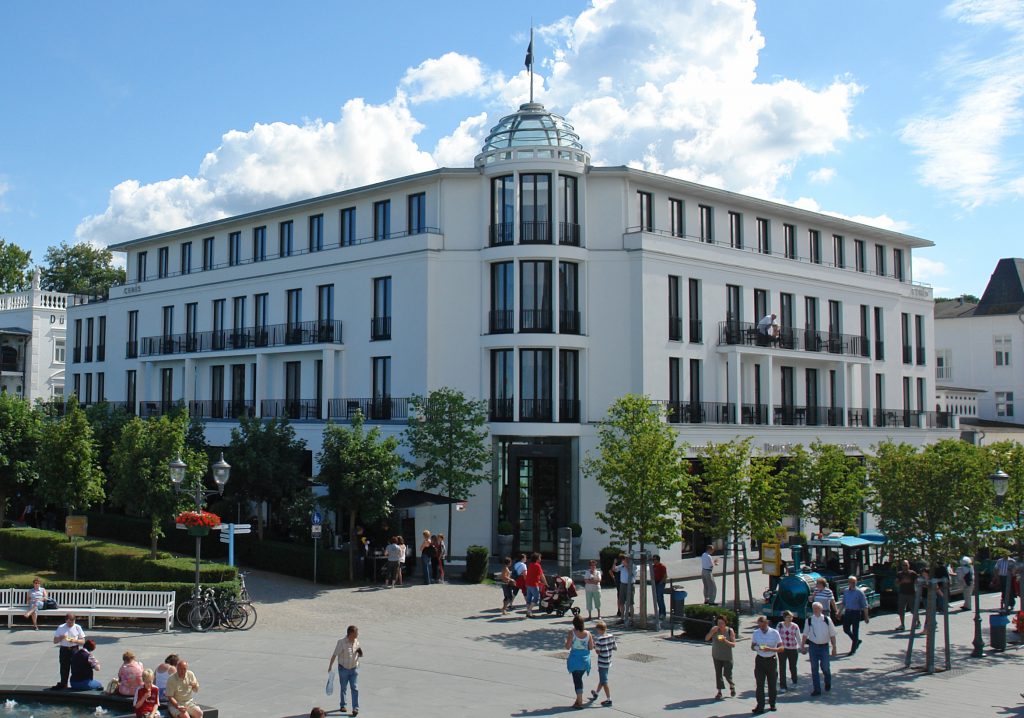 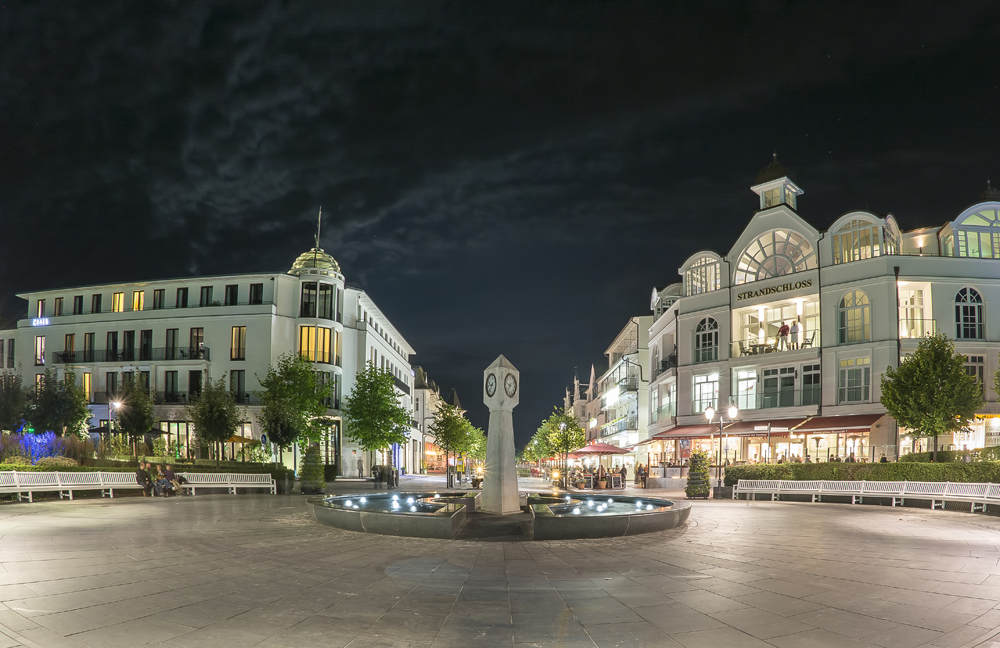 
Formerly known as: nicknamed Buttermann’s Corner Architecture: Old postcards from around 1900 feature wooden buildings on the corner block from where various sellers operated. These little shacks were made of boards and beams, and were neither unified in appearance, nor even aligned with one another. Later, a single-story right-angled corner building was built with a uniform, white façade and full-length shop windows towards the high street and promenade. Three pediments were set at regular intervals along the front of this shopping arcade. The architecture of the current building represents a clear design language with precise lines, high windows and doors, discrete materials and thoughtful detailing. A distinctive design.  Construction: around 1900 History/proprietors pre-1945: The opening of the Goldener Löwe Hotel in 1890 marked the beginning of development of what was then known as Wilhelmstraße (today’s Hauptstraße). The corner plot initially remained undeveloped; small huts or wooden shacks were probably built starting in 1901. The kiosks frequently changed hands. No reliable information is available regarding the plot’s ownership. The area is known in Binz as Buttermann’s Corner, a reference to Gottlieb Buttermann, owner of the neighbouring plot containing the Goldener Löwe Hotel. The plot likely belonged to the AG Ostseebad Binz estate, which completed bankruptcy proceedings in 1901. It’s possible that Gottlieb Buttermann subsequently purchased the plot. Around 1930, the huts were torn down and a one-storey shopping arcade was erected. Several shops were located here, among them the tobacconist Loeser & Wolff, the Berliner Morgenpost, Arthur Schuster’s beachside bookshop, and the Berliner Gentlemen’s and Ladies’ Hairdresser, all mentioned in advertisements and the text of the Binz Guidebook. GDR period: Various businesses were also located in the ground-floor shopping arcade during the GDR period, among them a hairdresser, the Sandmännchen ice cream parlour, the HO Seaside Buffet, as well as a stationer’s and bookshop. Post 1990: The shopping arcade with its various outlets and catering establishments remained after 1990. In 2004, the building was torn down. An entirely new structure was built, opening as a hotel in May 2007. Current usage: Premium designer hotel with restaurant, bar and spa facilities. Fascinating fact: There are a variety of roots to the name Cerês. For one, Cerês was the first planetoid discovered on 31 December 1801, classed today as a planet in its own right, with a diameter of 940km. Ceres was also an ancient Roman earth and mother goddess, the source of civilisation and culture. In addition, the name applied to the Roman goddess of agriculture and patron of the island of Sicily. In the case of the hotel, Cerês stands for timelessness, light-heartedness longevity and understated refinement.